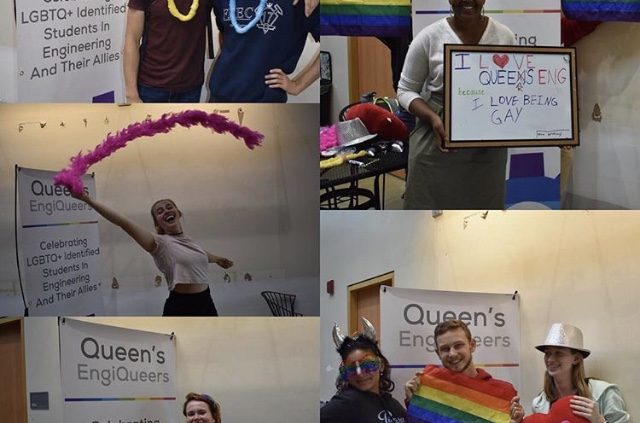 Also, check out the video below showing the highlights from the interview!

What is the story behind Engiqueers at Queen’s?

Engiqueers was established four years ago with the aim of creating a safe, accepting, and inclusive space for queer-identified students and their allies in engineering at Queen’s. Some of the events that they hosted last year included a Bridge Building competition and a Valentine’s Campaign for the Canadian Foundation for AIDS research. The purpose of these events was to improve mental health and destress students during the fall semester.

How did you find out and/or get into Engiqueers?

Nicholas: I’m coming back for my last year and I knew I wanted to get involved and make sure that I was a part in holding spaces for underrepresented individuals in the engineering community, like the QTBIPOC LGBTQ+ community. Especially since my identity is a black queer person. During the two years I spent away from Queen’s, I appreciated having people around me who could understand and share my experiences and now that I’m back I want to make sure that I am a part of creating a safe space for all engineers.

Ezra: I literally didn’t know EngiQueers was a thing until I noticed a sticker that my friend had. Because of that, I went to my first event where they had a table at QP and they were just having a conversation. At first, I was worried about it being cliquey, and exclusive, but instead everyone was so nice and welcoming. From there, I got more involved, started off as an Events Manager and then became President the year after.

What is one thing you want people to know about Engiqueers?

This year, Engiqueers is focused on making more events specifically catered to the QTBIPOC community, as well as focusing on all the intersectionality’s of being a queer person. The goal is to create a community that represents all identities; culture, gender, etc. Students in engineering cannot be categorized into one box. They are black, queer, fluid, etc. Engiqueers is creating a space for those voices that have usually been silenced, to find space, and hold space. The events we have serve more as a space where we people can come together and have conversations with others who understand them. It’s a space where people care about who you are and are trying to uplift who you are, in a safe and supportive environment.

We have had professional development, and educational events, queer sex ed. talks serving as educational resources, and held a panel with queer alumni and staff at Queen’s. We help students in more specific ways. Even just “fun” events allow for a space that is specifically and explicitly queer. It’s a place to meet other people of different ages and take up space.

A couple of years back the Engineering Wellness Center was closed down. It was a beacon for engineers to go talk and sit in a safe and supportive environment. Now that we don’t have that space available, clubs like ours have to take on that initiative to hold similar supportive environments. We are engineers but there is so much more to us. With our busy schedules there’s no time for us to sit and reflect on the rest of our identities, which can be draining.

What does Engiqueers mean to you?

Ezra: Engiqueers is about empowerment. Growing up you see so many ideas of “what it means to be an engineer” and I never saw myself in that. I never thought it was something I’d be able to do. Instead you see that gay men can be hairstylists or interior designers and that’s it. I never saw myself being technical or using math, which I’ve always liked. Representation matters and its important.

Nicholas: Engiqueers, for me, shows the resiliency of the community to take up space in such oppressive environments, especially engineering, which is predominantly cis white males taking up space and holding power. Again, it’s about empowering and shows resiliency to come together and show that show we’re here, we are engineers, and we’re queer, and we’re also XYZ. To show that this is what it means to be an engineer, and this is what it looks like to be an engineer, like it could be anything. I think it takes a lot of courage to do that in spaces where you’re told to not talk about these things.

Our main goal is to uplift and advocate for queer engineers and allies. We are trying to focus on the uplifting and advocacy for the QTBIPOC community. It is important to speak about the intersectionality’s of being a queer person, being a white queer person, and recognizing privilege and oppression. There are hierarchies in our society, and we need to talk about them. There are underrepresented groups in engineering, who need to know that there is a space for them and there are people who look like them and who are advocating for their lives. Engiqueers is a place where individuals can come out of the gaze of their oppressors and come together to be a community. That is the hopes of our initiatives.

We also really want to collaborate with other queer clubs or just clubs in general who are helping to create queer-positive spaces. There are so many clubs at Queen’s outside of EngSoc that a lot of engineers may not know about who are doing a lot of amazing labour to help the queer community, so we want to partner with them to help them with the work they’ve already been doing.

The main misconception is that our space is only for queer people or those who are very much out and self-assured. Engiqueers is an open space to allies, those figuring themselves out, or those in the closet. Nobody has everything figured out in life. Everyone is welcome. It’s not a space where you have to know your label. It’s a space for you.

Faculty: I’ve heard disheartening things about faculty, and I know that is out of my control. On the @erasedbyFEAS Instagram account, a student was being misgendered and treated rudely in the washroom by a staff member. It would be nice if staff could have positive space awareness training, to ensure they aren’t just going to be a bystander and actively help. There are people who are opposed to this training and there are some people who will never understand these things and that’s unfortunate, but despite this, I think this training should be pushed to the staff as being something important.

Change I would like to see, I think, is have the faculty prioritize bringing in representation of queer and BIPOC engineers, with financial backing behind it. The faculty should try and hold their own panels and have guest speakers so engineering students can learn from them and see what it actually means “to be an engineer”. I think that if you bring a queer engineer you should compensate them for their time and discussing their hardships, success, and traumas. It’s a lot of labor that BIPOC students put into doing this stuff. It’s time for faculty to put in the same sort of labor. Doing the same thing students have been doing for a while, the faculty should show that they prioritize their students.

In addition, I find it frustrating with everything that has happened with mental health support. It has been cut leaving three individuals to take on all of the engineering students. I think more effort could be made towards mental health. For example, giving out lemons with the duck song playing in the back for #BellLetsTalk was super inconsiderate. It talked down the severity of mental health and spoke volumes about the faculty. Queer people are far more likely to suffer from mental health illnesses and we should have conversations on how to uplift people. Mental health shouldn’t just be addressed in our tuition.

We want to hire more people of all types, so we can have all voices in the conversation. We are hiring for positions if you’d like to come join. If not please feel free to come to any of our events and check out our social media @QueensEngiQueers