Every year the Engineering Society honors those that have done above and beyond work in extra-curricular activities within the Society and University. This ranges from involvement in our student government, to involvement in various groups, athletics and more. There are even awards for Professors, Teaching Assistants and general staff. Awards are given out at the yearly awards banquet which normally occurs during the last month of winter term.

For the nomination page, please use this link: https://forms.office.com/Pages/ResponsePage.aspx?id=O8se1rE41UKCxO-yg4uSXH6erkxoN6RDv8eEpBkTrcNUN0kzQlZSQkZEN1dNVzZRRlFRMTlVODMzTy4u 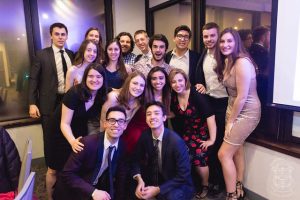 Engineering Society Spirit Award
It is the purpose of this award to recognize those undergraduate engineering students who have displayed outstanding non-athletic, non-academic, and non-appointed position spirit.

Peter Carty Memorial Award
Founded by the members of Science ’85 to commemorate Peter Carty, this award will be presented to the engineering student who has contributed to the spirit and good reputation of the Queen’s Engineering Society.

J. S. Donnelly Award
Established by the Engineering Society Council of 1980-1981, it is the purpose of this award to acknowledge the continuing interest and dedication of the individual in and toward the general welfare, prosperity, and reputation of the Engineering Society. This award is open to all members of the Society who are not currently members of the executive.

Science ’82 BEWIC Award
This award is given to the person who has shown good-natured sportsmanship, enthusiasm, and the qualities of a team player in any area not limited to athletics. The recipient should be a student who, through actions and friendly disposition, has eased the rigors of day-to-day life of their friends and classmates.

Engineering Society Service Award
To be awarded to a Service Manager in recognition of their outstanding contribution to an EngSoc Service. The recipient is one who displays a true passion for the organization, is dedicated to the Service’s long-term success and ultimately values the importance of Service opportunities for future students.

Kimberly Woodhouse Award
Awarded to an individual who has been a positive role model for their peers and who has had demonstrated hard work and perseverance in an effort to positively impact the community (either at Queen’s or in the broader world) in a meaningful way. The individual should have gone above and beyond what was expected of them in their effort.

Science Jacket Award
It is the purpose of this award to recognize the first year student who has contributed the most to extra-curricular activities and the good name of Queen’s. A donation will be made by the Science Jacket Committee to the charity of the recipient’s choice. The charity is subject to council’s approval.

Adam Wallgren Memorial Award
Given as a memorial to Adam Wallgren by his friends and awarded to a first year engineering student who, through actions and friendly disposition, has eased the rigors of day-to-day life in first year.

**Robert Hall Memorial Award
The Robert Hall Memorial Award was founded by the class of Science 86 and Queen’s Mining Club in memory of Robert Hall, a member of Sci’ 86. This is to be awarded to a student in second year on the basis of interest in the Engineering Society, participation in intramural or intercollegiate sports and the demonstration of those qualities exemplified by Robert Hall – spirit, fellowship, and enthusiasm.

Science ’44 Memorial Prize
This award is to be presented to a third year student on the basis of extra-curricular student activities. There is an academic component to this award; it will be presented subsequent to the release of final marks.

Mark Latham Memorial Award
Given as a memorial to Mark Latham by his friend and awarded to a third year student who has made significant contributions to Queen’s and community. In addition to good academic standing, the recipient will be a well-rounded student combining enthusiasm and leadership with integrity and a sense of humour. As this award has an academic component, it will be presented upon the release of final marks.

D. S. Ellis Memorial Award
This award is to honour the memory of D. S. Ellis, late Dean of the Faculty of Applied Science. It is to be presented to a graduating student in engineering who, in the opinion of their fellow classmates, has distinguished themselves by participating and taking a keen interest in athletic and extra-curricular activities, as well as possessing a satisfactory academic standing. This award will be presented upon release of final marks.

Norman Fritz Award – Science ‘71
To be awarded to a fourth year student of the Faculty of Applied Science who displays conspicuous leadership and management skills in a student-organised faculty activity that has educational value.

Peter R. White Memorial Award – Science ‘71
This award is a memorial to Peter R. White, given by his friends and awarded to a graduating student in Applied Science who has made the most outstanding contribution to the creative arts and the development of interpersonal relations both on and off campus.

Boyd Lemna Award
This award was established by Science ’92 in honour of their classmate Boyd Lemna. This is to be awarded to a mature graduating student(s) who has completed an engineering degree in four years. Preference given to students who are parents.

Given as a memorial to Ryan Cattrysse and awarded to a fourth year or graduating student who has gone above and beyond in advocating for and/or representing their peers in engineering. The individual should have demonstrated dedication and passion while being a representative of Queen’s Engineering to other bodies within the university and/or greater community.

Golden Apple Award
This award is presented by the Engineering Society to professors who have been nominated by their students in the Faculty of Applied Science. This award is based on the professor’s enthusiasm and interest in the students and their engineering activities.

Educational Excellence T.A. Award
This is awarded to the most deserving Teaching Assistant in any given year. In the eyes of the students they taught, this person will have brought concepts to life, encouraged questions and interaction, and dedicated themselves to improving the quality of undergraduate education through their actions and commitment.

Induction into the Order of the Purple Knights is the highest honour of the Engineering Society and is awarded to members of the society that have exceptionally contributed to EngSoc during their time at Queen’s. Please contact the President, at [email protected] if you have any nominations by March 8th, 2019. Nominations should include at least 1 letter of nomination from any member of the Queen’s community (a maximum of 4 letters may be submitted), and a list of positions of involvement within the Engineering Society.